Shoreditch Church isn’t discreet – it’s a great, big hulk of a building that’s impossible to miss.  It’s currently the location for the church scenes in the BBC comedy ‘Rev’, where Adam Smallbone passionately embraces the primary school head and electrocutes a local imam.  At the moment the rear is ablaze with tulips, so it’s not quite as rundown as the programme makes it appear, but – as you can see from the sign below- it does have its unique challenges

I have recently been part of a project researching and recording the history of Haggerston.  Haggerston is a difficult area to define, incorporating part of Kingsland Road, a tip of Shoreditch and a slice of Hoxton.  It is also changing again as ward boundaries shift for this year’s council elections.

As the old estates are demolished and communities separate and disperse, we worked with Geffrye Museum, Hoxton Hall and the Building Exploratory, to capture some of the secret stories of this part of Hackney .  Last Sunday, we led a guided walk around the area to explore  the impact of migration.  One of our stops was Shoreditch Church of St Leonard’s. 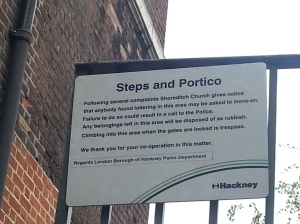 This building is the third one on the site.  Construction started in 1736 and immediately hit problems.  The contractors sacked all the local English builders so that they could employ cheaper Irish labour.  As a result, 4,000 rioters rampaged through the area destroying Irish taverns.  The disarray was only broken up when Tower Hamlets sent in the local militia.  Compared to their eighteenth century counterparts, contemporary rioters are little lower scale.

Guildhall records reveal Shoreditch Church as the place of baptism of one Jonathan Strong and the place can consequently claim a powerful role in the fight against enslavement.  Strong was an enslaved African, a young man in his teenage years, brought from Barbados to London by a lawyer and planter called David Lisle.  Strong was so badly beaten in the Lisle household, he was considered useless and thrown out.  He was found by the physician William Sharp who, with his brother, Grant, paid for Strong to receive several months of treatment at St Bartholemew’s hospital.

After Strong’s discharge, William and  Granville, funded Strong’s food and lodging and helped him find work with a Quaker apothecary.  Lisle, however, ‘sold’ Strong to another planter, James Kerr; Strong was kidnapped by professional slave hunters and sent for transportation.  However, Strong believed that his baptism had liberated him and called on the Sharps to fight his case –  he and Sharp won.

Several years of litigation followed.  English law favoured the master’s rights to own a man as property, even on English soil and Kerr sought compensation.  Eventually, Kerr’s claims were dismissed and he was ordered to pay compensation.

Granville Sharp became a prominent abolitionist and fighter against social injustice.  He is the ‘Granville’ of Granville, Jamaica and Granville Town, Sierra Leone.  He died, aged 79 and is buried in All Saints Church, Fulham.  His tomb is a Grade 2 listed building and there is a memorial plaque to him in Westminster Abbey.

Jonathan Strong died a free man.  He was 25.  I haven’t yet found his place of burial.

On the things that fill our world with life.

The Science of Crime; The Art of Fiction by DP Lyle

Presented by the Alliance of Radical Booksellers

A clearing house of information for self-publishers

...not the stereotypical picture

where politics, sport, and popular culture ...... collide with Race

A Library of Literary Interestingness

"Hardwick's writing has the power and humanity to make you wonder about the way you see the world" - Laura Brewis, New Writing North

Espen Stenersrød- From Pen To Heart

Jack Kerouac with a scent of Henry Vaughn

Radical fiction award given by the Alliance of Radical Booksellers

If you tolerate this then your daughters will be next

Learning how to behave like a socially acceptable woman

joyfulmamahood: My journey through parenting